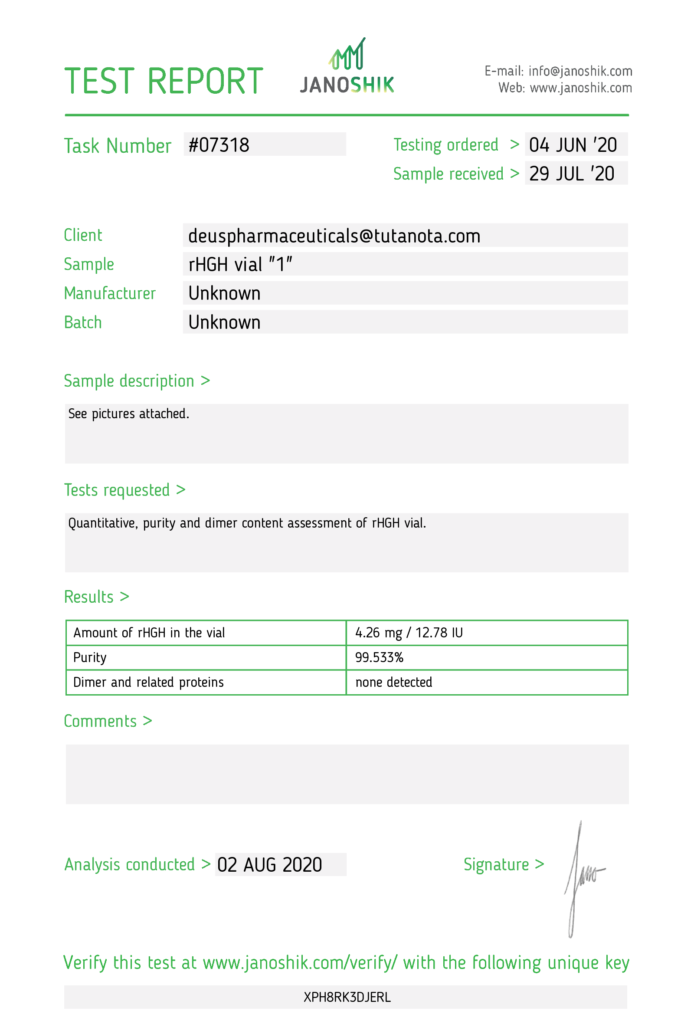 Human Growth Hormone is a proteinaceous hormone made up of a chain of 191 amino acids and is produced by the pituitary gland. It is responsible for the protein deposition, growth of tissues, and the breakdown of subcutaneous fat stores. Human growth hormone is produced in its highest levels during adolescence, as should be no surprise since this is when the majority of a person’s body growth occurs. In adulthood, growth hormone still circulates in the body but at much lower levels. The primary medical purpose for administration of human growth hormone is for those that suffer from a deficiency of the hormone during their adolescence so that normal growth can occur. However in recent years the popularity of human growth hormone has surged as a means to treat age-related degenerative conditions, as well as other so-called “anti-aging” therapies.

Human growth hormone first became available in the 1980’s. At first it was extracted from the pituitary glands of cadavers. This practice was discontinued however when it was determined that administration of the hormone that was collected this way was linked to the spread of a fatal brain disease. All of the human growth hormone that is now produced is synthetic.

In terms of the use of human growth hormone for strength athletes and bodybuilders, the effects are two fold. First, it has been demonstrated that consistent administration of human growth hormone can help to promote loss of body fat. In part this is due to the ability of the compound to cause cells in the body to increase the rate with which they utilize fats while also decreasing the rate that carbohydrates are used. This fat loss is achieved because of the ability of growth hormone to stimulate triglyceride hydrolysis in adipose tissue as well2 .

In conjunction with this, human growth hormone helps to promote the movement of amino acids through cell membranes. This, along with the fact that growth hormone promotes the growth of the cells in the body and increases the rate at which these cells divide and multiple, obviously indicates that it is also capable of enhancing anabolism if used at appropriate doses.

It has also been demonstrated that human growth hormone has positive effects on erythropoeisis, i.e. the manufacture of red blood cells4 . This effect should help to improve the endurance of an athlete and may also help to promote anabolism. To the degree with which this effect will occur in users varies quite widely, but all users should show some improvement.

Human growth hormone is primarily secreted in rhythmic pulses during sleep. This occurs by the mechanism of Growth Hormone Releasing Hormone and Somatostatin being released in an alternating fashion. For the most part users will want to mimic the natural release of growth hormone, while also not disrupting the body’s natural production of the hormone. This is often a delicate balance.

In terms of a dosing schedule for the compound, there is some controversy as to the best method for fat loss/anabolism. It is thought by many that daily dosing is of primary importance when using human growth hormone due to the extremely short active life of the drug. Blood concentrations of the hormone reach their peak within two to six hours of the injection, with the half life being only twenty to thirty minutes3 . This of course makes it impossible to maintain stable blood levels of the compound.

However a stable level of the hormone is seemingly unnecessary as this does not occur naturally when the body produces the hormone. In fact there is some research that indicates that administration of the hormone every other day, instead of injections every day, may result in a more efficient use of the hormone. In a study using children ranging in ages of two to four, it was demonstrated that administration of the compound every other day, as opposed to every day, resulted in more growth in the children giving this dosing schedule5 . One theory as to why this may occur is that injections every other day may simulate the natural pulsile frequency of growth hormone secretion. This would also allow the growth hormone receptors in the body recover from the surge of growth hormone that would be circulating and then be better able to make use of the next dose that is administered the next day.

The only problem with the above theory is that it has never been tested in terms of its effect on muscle growth and/or fat loss, only in the height growth in extremely young children. For the most part strength athletes and bodybuilders have administered growth hormone every day and have achieved good results. This method would seemingly provide a user with a consistent wave of growth hormone throughout their cycle and allow the body to utilize it rather efficiently.

Another common practice among users is to run growth hormone for five days and then take one or two days off, or some other similar schedule. This would seemingly be “splitting the difference” between the two dosing schedules outlined above (as well as save money), but there is no research to indicate that it is of any significant benefit either way.

In terms of dosages needed to see specific results, there is primarily only anecdotal evidence to be relied upon when it comes to fat loss and an anabolic response. The relevant research does not discuss these effects in any great scope. However, most users have indicated that doses of approximately two to four international units (2-4 iu) per day in men will usually produce a noticeable loss of body fat in most users. In terms of getting an anabolic response, the experience of users vary considerably. For the most part it can be concluded that most users will need to administer larger doses than needed to experience fat loss if they wish to see a noticeable anabolic response from human growth hormone. How much more varies from individual to individual. There are some users who have indicated that using extremely large doses of the hormone has resulted in dramatic gains in muscle mass, but often these doses are cost prohibitive for most. Individuals will likely have to experiment themselves to find a level that they are comfortable with, as well as what they can afford.